Frequent visitors are probably well-aware by now that my long-term project is scanning and archiving my family’s extensive library of photographic negatives and prints. I recently acquired a cache of photos from my mother’s house and have been ingesting the contents into my Lightroom catalog voraciously and, while doing so, came across a photo that one of my parents took in San Antonio, Texas, in November 1974 (I assume it was taken by my mother as the caption on the back is in her handwriting).

This photo was shot from the top of the Tower of the Americas (as seen in the featured image at the top of this dispatch) and shows Downtown San Antonio. It was shot on a Polaroid Land Camera and thus no negative exists (or ever existed), so all we have is this slightly-worn print (but at least we have the print!).

And, as a digression, a bit about the Tower of the Americas: this 750-foot (229m) structure was designed by architect O’Neil Ford as the theme structure for the 1968 World’s Fair (HemisFair ’68). It was built by continuously casting the concrete shaft using a slipform that slowly rose into the sky as the concrete set. Once the shaft was completed, the top part—containing the observation decks, gift shop, a revolving restaurant and elevator machinery—was built at ground level around the base of the shaft and slowly lifted to the top. Today, it’s one of the few structures from the fair that are still extant. Others include the Convention Center Theatre, the Humble Oil Pavilion (Discover America!) and the State of Texas Pavilion (now the Institute of Texan Cultures), along with a handful of others.

The most-prominent structure in the photo also deserves a bit of architectural digression. The building in the center of the photo is the Hilton Palacio del Rio, also built for the fair. This building is famous, at least in construction/architectural/civil engineering circles, as the first major project to use modular construction. Due to the short timeframe available to complete the hotel, the construction firm (H.B. Zachry Company), built the rooms at a staging area several miles from the site, then trucked them to the location and hoisted them into place. The rooms were completely furnished and decorated before departing the staging area, ready to welcome their first guests (I can’t find a source that confirms if the Gideons were able to place their bibles in the nightstands at this point). Using this methodology, the 485-room hotel was constructed in 202 days and even opened a few days earlier.

You can see a closer shot of these modular rooms in this photo from my photography site, 75CentralPhotography.com below:

Digressions aside, what really intrigued me with this photo was that I happen to have taken almost the exact same photo 44 years later, when my wife and I took a spur-of-the-moment trip to San Antonio.

As I examined previously, the San Antonio downtown core has really not changed that much over time. Sure, a few things have been torn down in the last half-century (notably the convention center—the large building in the foreground across from the Hilton—which was demolished in 1995) and few new skyscrapers have been built (notably, the Weston Centre, the Marriott Riverwalk & the Frost Tower), but, for the most part, the city’s skyline has remained remarkably static, especially when one considers how much we Texans love to tear down the old stuff in favor of the new.

Finally, to make things a bit easier to compare, I’ve made the below side-by-side before/after slider by aligning the old photo as closely-as-possible to my newer shot. 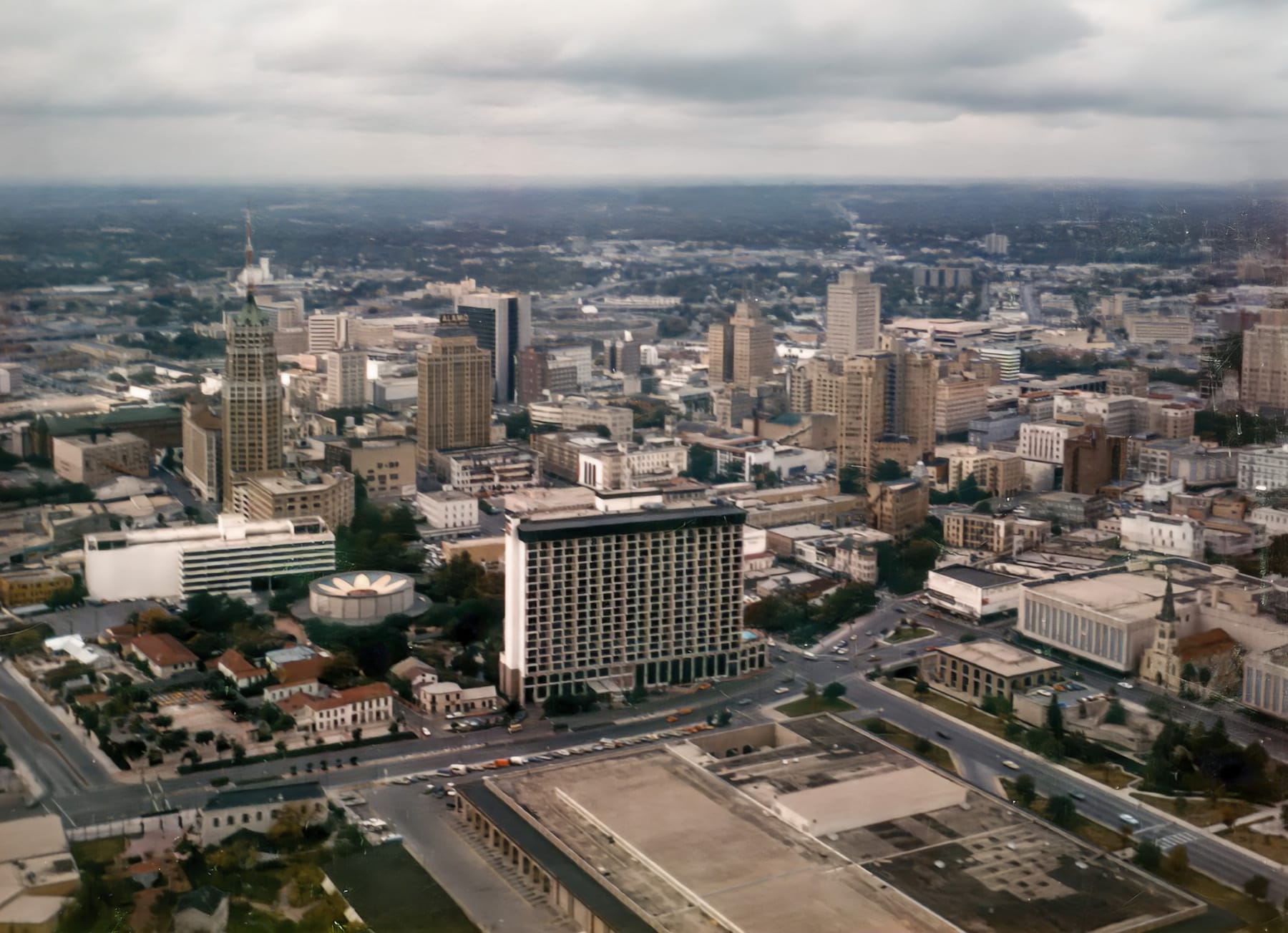 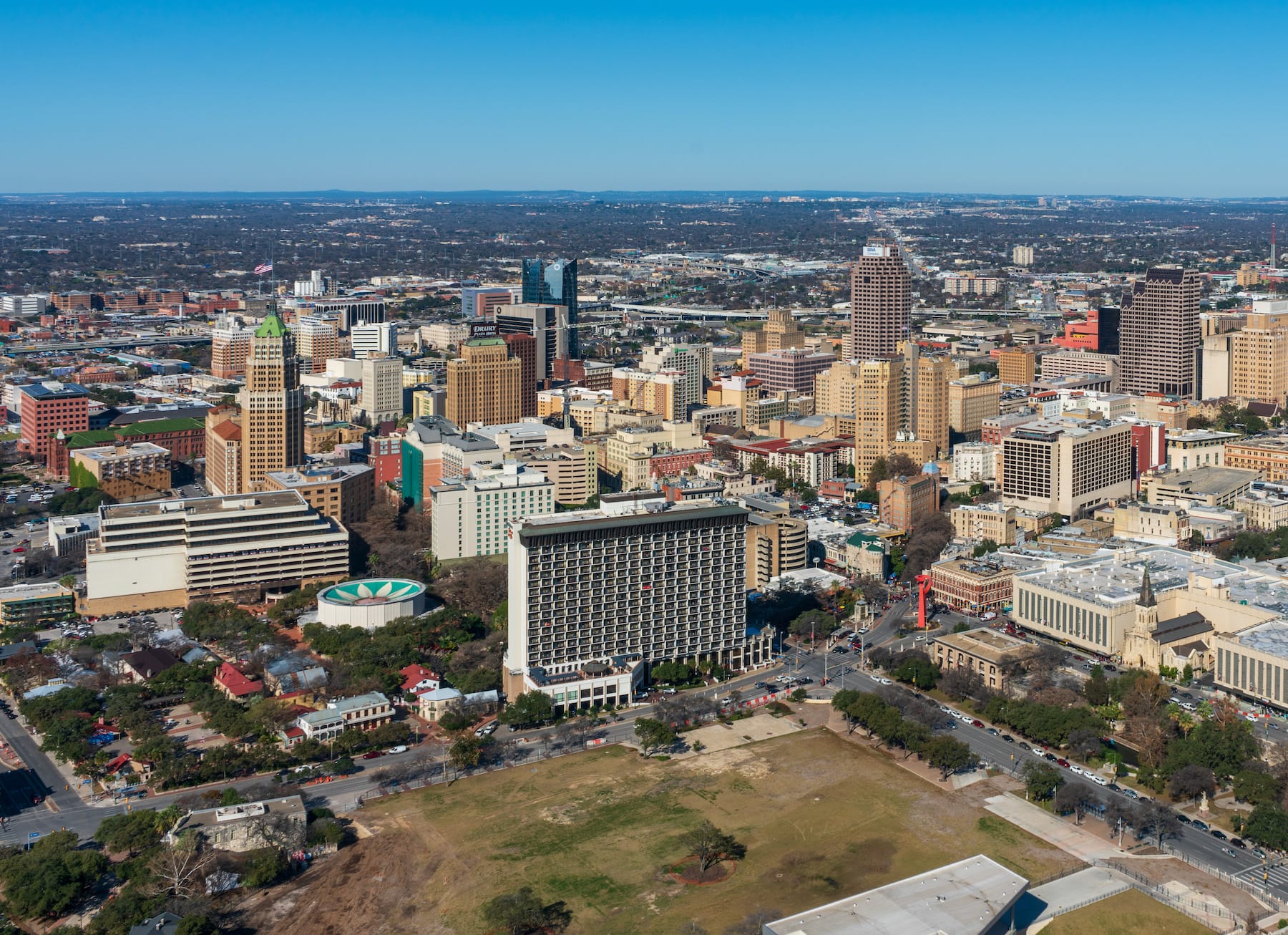 Home » Interesting... » Side By Side in San Antonio
a